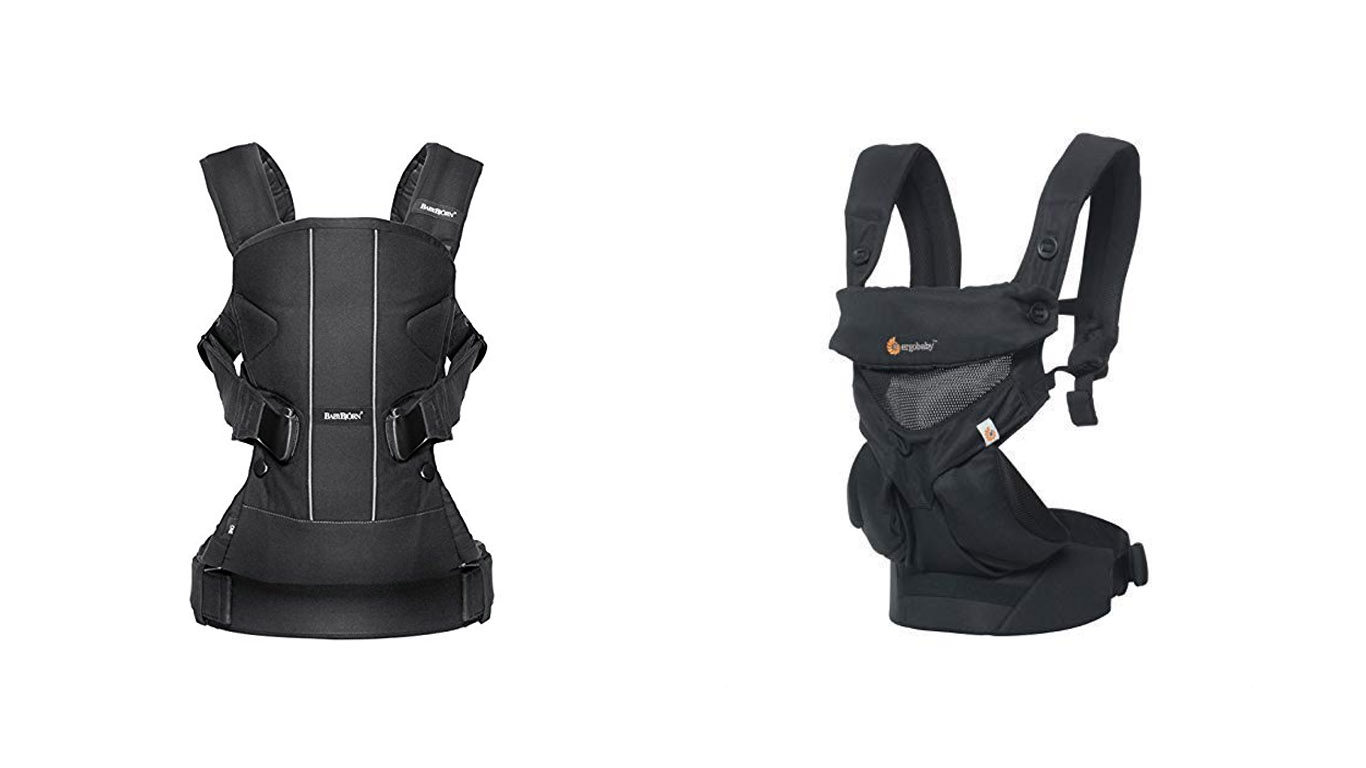 When it comes to choosing a baby carrier, the choice for many parents comes down to the Ergobaby 360 VS the BabyBjörn One.

Thanks to accidentally leaving our Ergobaby 360 behind at an Airbnb in Spain, we have made extensive use of both carriers.

In this guide, we’ll be taking a detailed look at the two baby carriers to try and help you decide which one is best. 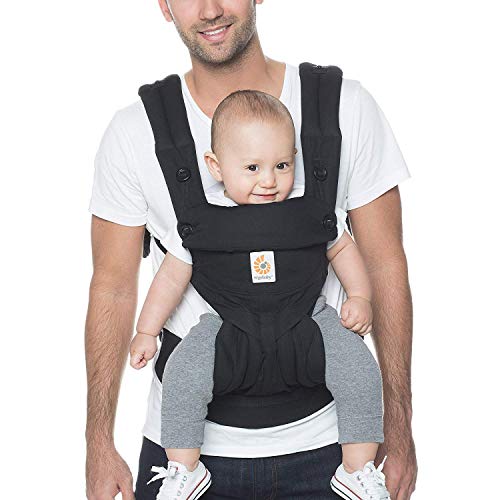 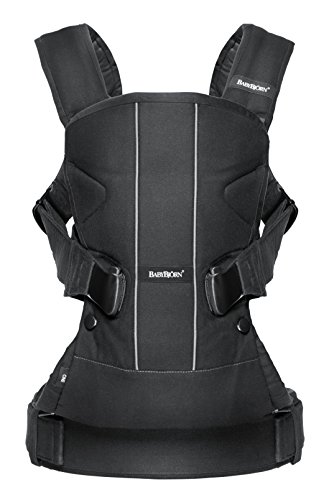 Ergobaby 360 vs. BabyBjorn One – What are the big differences

Regardless of the brand and model, a carrier must be comfortable and safe for your baby and convenient for you to carry around as you travel the world.

Ergobaby and BabyBjorn are two of the most trusted brands that manufacture a number of carrier models.

They are both regarded as two of the leading names in baby carriers and both models are at the top of our list of best baby carriers.

Over the years, both brands have manufactured various carrier models, including the Ergobaby 360 and the BabyBjorn One. They are often compared against each other as their products share a lot of features and are priced at a similar level.

Both models are designed to be used from the time your baby is a newborn up to when they are around three years of age. However, despite the similarities, both products have differences as well.

Here is a side by side comparison of the two models:

The BabyBjorn is a slightly better choice for infants as it doesn’t require the use of an infant insert.

The Ergobaby 360 does require you to purchase the insert if you plan on wearing it with an infant.

On the other hand, the BabyBjorn doesn’t have a hood to protect against sun and light rain. We also found that the head support flap tended to get in the way, and got very dirty over time.

We also found the waist strap on the Egobaby 360 offered better support.

The Ergobaby 360 carrier is first up on this review.

This particular carrier is popular among parents for a reason.

The 100% pure cotton allows for maximum comfort and breathability, keeping you and your babies airy when it’s hot outside.

The cotton is lightweight and weighs only 1.5 pounds. This means that it doesn’t add unnecessary bulk to your body. But it still has padded, long straps that are comfortable and provide decent lumbar support.

A definite bonus is the pocket, which can hold a regular size smartphone.

The straps on your baby carrier are incredibly important. They take off a lot of the physical pressure that comes with carrying a baby on your shoulders.

The straps on the Ergobaby 360 carrier are padded and crossable.

This relieves a lot of the strain from your mid-back and prevents you from having a sore back after a long day of babywearing.

When BabyBjorn released their Original carrier, it quickly became one of the most popular models available in the market.

However, that carrier had its flaws. In order to make the carrier more ergonomic and comfortable, the BabyBjorn One was released.

This particular carrier is a great alternative to the Ergobaby 360.

Like the Ergobaby, the BabyBjorn One allows parents to carry babies from when they are newborns until they are three years old.

Unlike the Ergobaby 360, you don’t need an additional infant insert.

You can also carry your baby in four different positions.

The manufacturer designed the carrier meticulously to ensure it was ergonomic for the baby. The seat has back support that makes sure your baby’s neck and head stay in place and stops them from wobbling when you walk with them strapped in.

The design also considers the wearer’s comfort, so you don’t strain your back and shoulders, especially when carrying a 1 to 3-year old.

The straps are wide and padded, so the carrier doesn’t dig into the your shoulders.

Which Carrier is Right for You

Comparatively, both carriers are pretty similar and make a fantastic carrier for travel and regular use.

Let’s take a look at some factors that may help you make that decision:

Both of these carriers are designed with great care and are improvements on previous models that were lacking many of the features these carriers have.

Compared to other carrier manufacturers, these offer greater safety for your baby’s spine and joint health.

Certified by the International Hip Dysplasia Institute, these are meant to keep your baby’s hips, spine, head, and neck in the right position.

However, the foldable head support in the BabyBjorn model offers more support.

The material, weight, and locking mechanism of the carrier can make or break how easy it is for the wearer to use. Thick and incredibly dense materials can make the baby and wearer sweaty and uncomfortable.

Both carriers discussed here are made of 100% cotton and 3D mesh. These materials are breathable and prevent the wearer and baby from getting hot.

When it comes to overall wearability we found the Ergobaby slightly more convenient.

This was mainly due to the large, padded waist strap that provided a lot of back support.

While some people complain that the strap makes too much noise, we found we could get around this by loosening the straps, taking our sleeping son out and then taking the carrier off at a distance.

The BabyBjorn One and Ergobaby 360 overlap in many areas, and to be honest you can’t go wrong with either choice.

If I was recommending a baby carrier for an infant, I would give the slight edge to the BabyBjorn One.

For a larger baby or toddler, the Ergobaby 360 provides slightly better support, and the hood provides additional protection against sun and light rain.

Now that you are well-versed with the details, you can choose whichever makes the most sense for you. 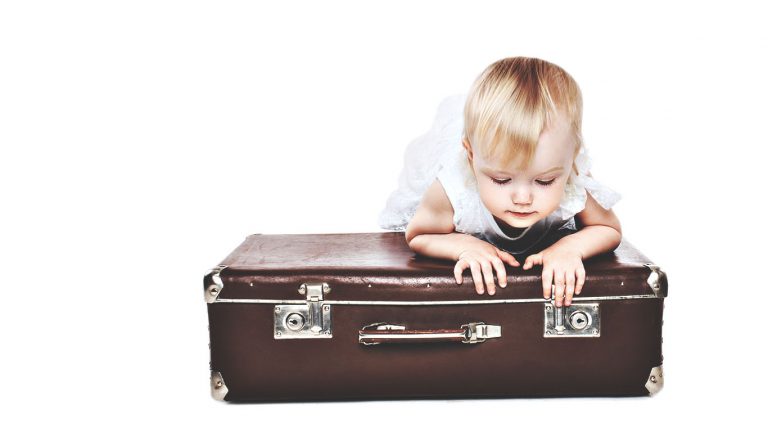 When you’re traveling with a baby or toddler,  having the right gear can make or break your trip. You want to pack all the essentials, while saving as much space in your luggage as possible. Packing lightweight, portable travel gear can make your trip easier and more fun for both you and your little one…. 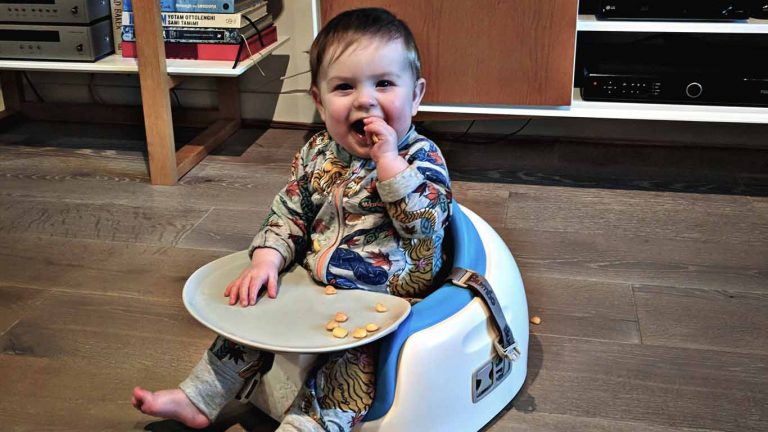 Traveling without your own high chair can be a bit of a gamble. It’s possible to book an Airbnb that includes one, and some restaurants will provide them for you. However, you can’t always rely on one being available, and they’re not always the cleanest or most comfortable option. We’ve had accommodation that stated a… 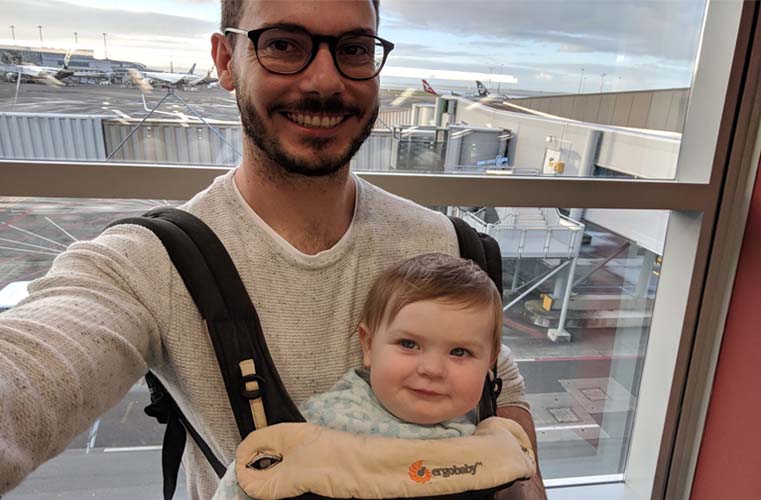 We’ve traveled with the Egobaby 360 in hot, sticky summer in Japan and freezing cold winter conditions in Europe. After extensive testing across multiple continents, we named it our best baby carrier for travel. The Ergobaby 360 checks all the boxes for comfort, design, convenience, and durability.  It offers a nice level of comfort for… 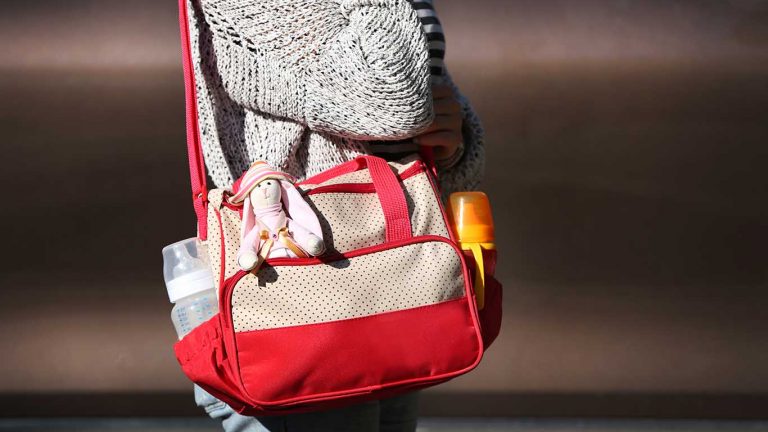 Traveling with a baby is stressful enough without having to constantly hunt for nappies, wipes or a clean bottle. Having the right diaper bag when you travel makes a huge difference. In this guide we’ll run through what features to look for in a diaper bag, and share our picks for the best travel diaper… 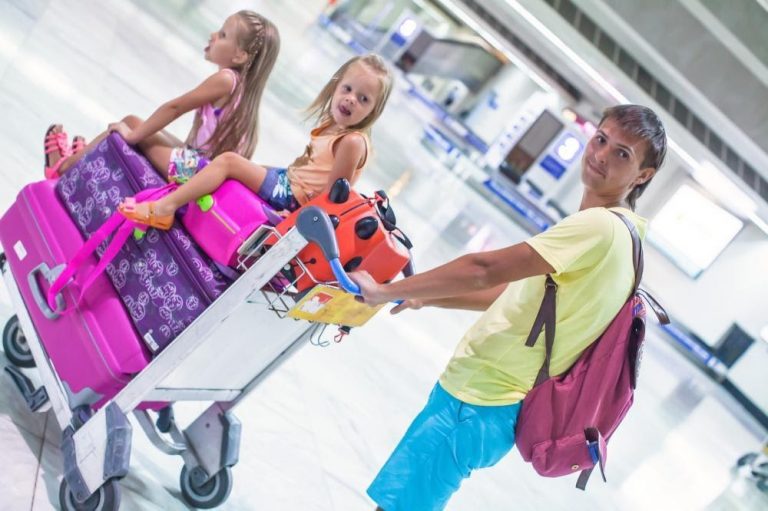 We decided to buy the BabyBjörn One in a bit of rush. We were traveling through Spain, and were two hours into a four hour drive when we realized we had left our ErgoBaby 360 at the last Airbnb! Traveling without a baby carrier was not an option we wanted to consider, so we rushed…